THE NAKED, AND THE DEAD 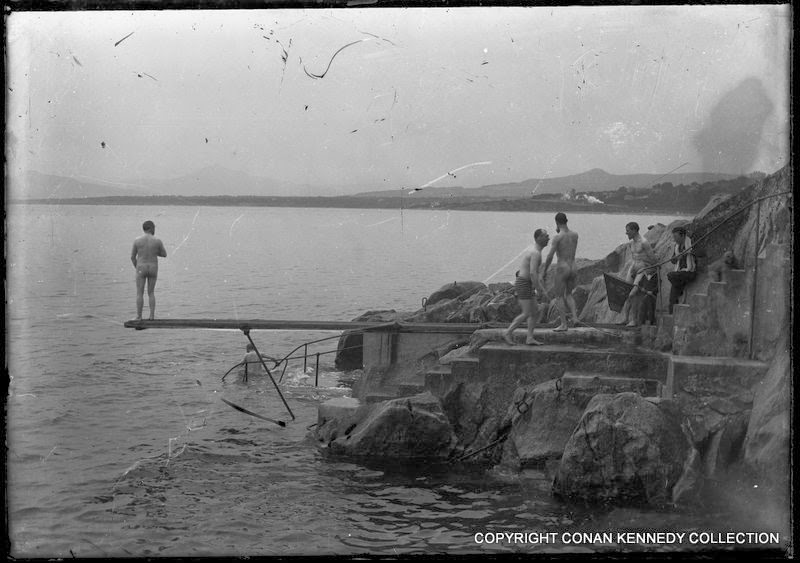 Looking carefully, to the right of this picture, we will see a small boy holding a flag. He stands disturbingly close to the penis of that buck naked man. Who that man be, no idea. But that boy is my half uncle Frank Conan. He became a soldier and won a medal in the 1st ww. He died, once again a soldier, in the 2nd ww. He was a tough enough nut. I suppose a childhood spent in the proximity of naked men in the Vico Men’s Bathing Place sends a chap one way or t’other.
Yes, this is the Vico Men’s Bathing Place in Dalkey in around 1904. It was founded by my mother’s family who lived nearby. One of that family was Walter, who ran a company called DeSelby Quarries. An inventor, he was interested in underwater explosives, and tested out his depth charge fuses at this very spot. He was in fact the inventor of the 1st ww depth charge used by the British against the Germans. He was also the inspiration for DeSelby, Flann O’Brien’s eccentric Dalkey Archive inventor. But I’ve written of all that before and no-one much noticed so (dear readers) I see little point in giving people another chance to ignore such interesting information.
Moving right along...
My son, who is in mid twenties, a graduate of UCD, a poet and an intellectual and (being a graduate of UCD) a tourist guide in Rome, he tells me he finds this photo strange, in that it depicts naked men who are dead. And I suppose it is, and I wonder why. It’s not as if images of nakedness are not all around, though of course the majority of such tend to be of women. And yes of course in art, which includes photography, we do see many images of naked women who are dead. In fact much of classical art is based on images of naked women…who are dead. Not so, so much, with men. Yes the classical sculptors did portray the male form in an elegant and gracious and attractive manner, as have done such modern artists as Hockney. The more disturbed variety of modern artists, Bacon and Freud come to mind, they have chosen to portray naked men as grotesque. Bacon particularly, but then he was pretty grotesque himself.  Be all that as it may, what no-one seems to have done is portray naked men in ordinary day to day situations. They are either idealised, as in gay pornographic culture, or rendered grotesque, as mentioned above.
So that solves that, that’s the strangeness of this photograph!
So, as they say in the Roman tourism business, Grazi, Dad.
This following bit comes with an asterisk, because it’s an addendum.
(An addendum, to those of us in the writing business, is something we can’t quite work out where to fit in).

*The Naked and The Dead was and still is a blood and guts war novel by Norman Mailer...many critics said it was a fugging good book and Gore Vidal said it was rubbish. But Gore Vidal is precious and bitchy and obviously belongs in Aosdana…which gives us three good reasons to ignore him. More interesting is that many people complained because the original publishers of the book used the spelling fugging for the more correct version of the expletive. Oh well, that was the nineteen fifties for you.