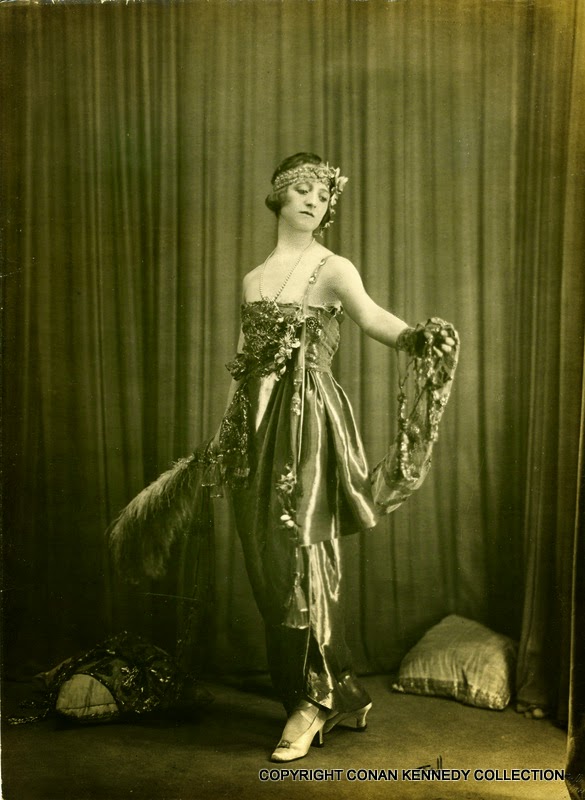 Certain folks in the media recently seem to have been getting excited by the fact that the elegant English Duchess of Cambridge is related to the small Irish singer Chris of Burgh. But sure that’s nothing in this genealogical game, I can top it easily.
This young woman here (go away, I saw her first) is related to someone buried in Chapelizod (CofI) graveyard, to a once famous Irish barrister and, well, to me. She has connections to the Titanic and…not only that, she was one of the world’s first ‘mannequins’ or fashion models, was central to the work of Lady Duff Cooper and (thus) to the fashion house Lucile which…wait for it…was mentioned in the storyline of TV’s Downton Abbey as being the fashion house for late Edwardian women to acquire their “trousseau lingerie’. (I suppose we can see why from the picture.) The fashion house Lucile is still going and, it is reported, following the Downton Abbey plug, sales rose by some fifty percent.
The original founder of Lucile was that Lady Duff Cooper, a coutourier with salons in London, Paris and New York. It was she who invented the “cat walk”.  The Duff Coopers were on the Titanic when it sank and were later vilified because they escaped on a half empty lifeboat. They were travelling (mysteriously) under the name “Mr and Mrs Morgan”.
Yes, there are many murky elements jostling with family skeletons in all this.
But, joining up the ( less murky) dots.
The strangely lovely woman here is Edith Morgan, known as ‘Corisande’. The photo dates from 1911. She had two children by a soldier in the 1st WW, then three more by a Harold Morgan Chandler. This Harold Morgan was son of Edith Marion Morgan Byrne, who was a daughter of James Peter Byrne, a Dublin solicitor who lived in the Chapelizod house and estate which has now been developed as King’s Hospital School. James Peter’s wife was Monimia Morgan, who was a kinswoman of Henry Morgan the Welsh pirate. (This couldn’t get any better.) A son of James Peter and Monimia was Henry Morgan Byrne, a ‘colourful’ Law Library character in the 1930’s. And this is where William Butler Yeats comes in. He, WBY, had a first love by the name of Edith Laura Armstrong. However, she spurned him and married the above Henry Morgan Byrne instead. Not that that went well really, Henry divorcing Edith Laura a while later on the grounds of her adultery. WBY never got over this and it is said that Edith Laura rather than Maud Gonne was his true inspration. Whatever. My connections? Henry Morgan Byrness sister, Monimia Ellen Morgan Kennedy, known as Nina, was one of the wives of my grandfather, and she is buried in Chapelizod. Two or three years back I wrote a newspaper article about that Nina and recently a googling family researcher, of whom I’d never heard, got in touch with me and told me all about this matter, and particularly Corisande, his mother. He is Leonard Chandler, an elderly retired British Royal Navy man.
And so they go on, connections.