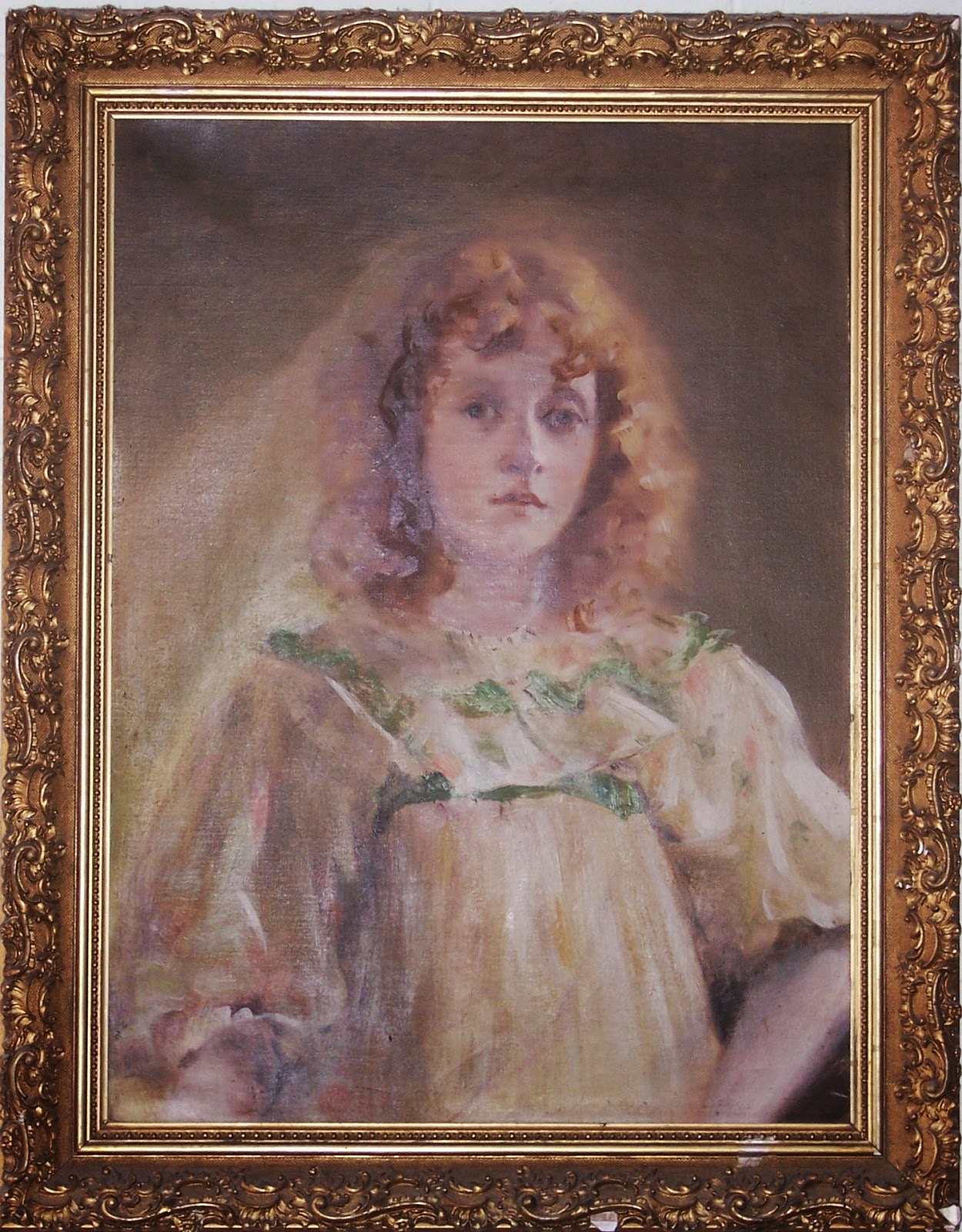 Ok, not a photograph, but an image. Same difference. The girl bears no connection to my family, nor indeed to the previous owner, the woman  who gave it to me. She was moving house, and I was helping.
The frame is probably worth more than the painting. Not that it’s a bad painting. It’s a good painting. But it’s not by Lavery. Or John Yeats. Or Sarah Purser. Or indeed by anyone whose name is known. Strangely, it’s not by anyone at all. It’s by a pseudonym. A note on the back tells us it was painted by ‘Mother Mary Magdelen’. A nun. In the late 19th century. And who that Mother Mary was, her family name? Not easy. One feels that there were countless Mother Mary Magdelens around in those times. Running schools and hospitals. And yes, orphanages and homes for single mothers too. We tend to remember the problems of the latter, the less positive. Because that’s what we Irish are like, I suppose. Bitter folks, resentful.
Easier to identify the girl in the painting. Not extraordinarily easy, but for a genealogist, not too daunting.
The note on the back of the painting, in addition to naming the artist, tells us that this is ‘Baby’, and that  ‘Mother says it’s very like her’. And that’s about it. But its owner tells me that her own roots are in Limerick and Clare, and that the painting came from thereabouts. And was bought in the 1940’s at the clearing of a big house. Creagh, she recalls, that was the name of the landed people of the house.
Let’s find them.
First stop the National Library. And there Burke’s Landed Gentry of Ireland tells us that the Creaghs were indeed landed. They owned considerable estates and many large houses in County Clare. And, that though probably described by others and themselves as Anglo Irish, they were actually descendants of the O’Neills of Ulster. We have the Creaghs of Cahirbane, the Creaghs of Dangan, the Creaghs of Walterstown, and the Creaghs of Rathorpe. And we are looking for a family who had a daughter of about the age of the girl in the painting in the 1890’s. The Creaghs of Dangan fit that bill.
But, to firm things up a bit, we are also looking for a family whose house was broken up in the 1940’s. A quick glance at the internet database of the Irish Architectural Archive tells us that the Creagh house in Dangan was demolished at about that time.
Other records tell us that Dangan, near Ennis, was home of Cornelius Creagh. He had 6000 acres in County Clare. He had two sons, both of whom died without issue, and three daughters, who survived. He left Dangan jointly to two of these, Olivia, and Elizabeth Clara.
Records show that Olivia married a Captain Hugh Macnamara MacMahon, that she was known as Mrs MacMahon Creagh, and that she was a widow in 1901. The Dangan estate consisted of some six thousand and four acres. Olivia had a son, who died as a child, and a daughter, who was born in 1888. This daughter was also called Olivia, and thus ‘Baby’ to distinguish her from her mother.
This is the girl in this portrait.
The 1911 Census shows her as living in Dangan, aged 22, with her mother. Also in residence is her mother’s brother-in-law, and six servants. Thirty six years later, in January of 1947,  Baby Olivia died in Ennis. She was apparantly unmarried. The estate was purchased the next year by the Land Commssion, and the house was demolished..
And as for the rest of the story of  Baby Olivia, a task for another , methinks.

New postings will be made here from time to time, hopefully every few weeks.
Contact morriganbooks@gmail.com if you'd like an email alert.
Many earlier articles in the Connections series can be viewed
by going to this link ,and still more are held
on The Irish Times archive.

Other photographs from the Conan Kennedy Collection are to be seen on the discontinued blog http://cksoldphotos.blogspot.ie/